Vancouver, BC, December 3, 2014 - Aurcana Corporation ("Aurcana" or the "Company") (TSXV: AUN, OTCQX: AUNFF) is pleased to announce an updated resource estimate for the La Negra Mine, the Company's silver, zinc, lead and copper mining operation located in the State of Queretaro, Mexico.

AMC Mining Consultants (Canada) Limited ("AMC"), an independent mining consulting firm, has recently prepared a new mineral resource estimate (the “Estimate”) for the Company's La Negra mine. The Estimate is based on 14,578 assays comprised of 4,074 drillhole samples, 8,674 channel samples, and 1,829 longhole samples obtained by Minera La Negra S.A. de C.V. (a subsidiary of Aurcana) during the period from 2006 through to 2014, and by Industriales Peñoles S.A. de C.V. from 1967 to 2000. A summary of the Estimate is tabulated below:

MEASURED AND INDICATED RESOURCES FOR ALL DEPOSITS AND ALL BLOCKS WITH A MINIMUM |
RECOVERED VALUE OF US$30 AS OF SEPTEMBER 30, 2014

Ounces and pounds of in situ metal are calculated using only resource blocks with a recovered value of US$30 or greater, which corresponds generally with the $32/tonne operating cost provided by Aurcana for the La Negra Mine from January to October 2014. Metal prices and recoveries used for value and silver equivalent estimates are: Silver - $21.50/83%; Copper - $3.10/75%; Lead - $0.95/78%; Zinc - $1.00/80%. Silver equivalence is calculated using the following formula:

Three dimensional solid models of eleven mineralized zones were generated by Aurcana using SURPACTM geological software; the solids were then used to constrain the resource estimate for each mineral zone. Solid models of the underground workings were also provided by Aurcana and the workings were subtracted from the mineral zone solids used to estimate the quantities of resources.  Therefore the Mineral Resources (grades and tonnes) were estimated within the geological solid models with the workings extracted. The Estimate was created using DATAMINE Studio 3 software.

A block model was created to contain all eleven mineralized zones. Within individual zones the size of resource estimation blocks used do not exceed 5 x 5 x 5 metres and are not diluted.  The grades in the block model were estimated using ordinary kriging.

The Estimate has an effective date of September 30, 2014, meets the guidelines and form as set out in National Instrument 43-101 – Standards of Disclosure for Mineral Projects (“NI 43-101”) and CIM standards, and was prepared for Aurcana by AMC. The resource estimation was undertaken by Greg Z. Mosher, P.Geo of AMC, a qualified person as defined under NI 43-101 reporting requirements. Mr. Mosher has consented to applicable disclosure contained herein regarding the Estimate. Mr. Mosher is independent of Aurcana and its subsidiary companies.

AMC is currently preparing a Technical Report in support of the Estimate. This report will be filed by the company in its entirety on SEDAR (www.sedar.com) within 45 days of the date of this news release.

About Aurcana's La Negra Mine

The La Negra mine was discovered and developed by Industriales Peñoles S.A. de C.V (“Peñoles”). The mine commenced production in 1970 as an underground operation and produced at 800 tonnes per day (“tpd”) until the mine was put on care and maintenance in 2000. During this 30-year period Peñoles mined approximately 6,600,000 tonnes of ore producing 36 million ounces of silver, 323 million pounds of zinc, 70 million pounds of copper, and 161 million pounds of lead. In 2006 Aurcana Corporation acquired an initial 80% joint venture interest in the property, subsequently increasing its interest to 99.86%. La Negra was placed back into production June 1, 2007 by Aurcana at a rate of 1,000 tpd.

The Company’s management believes that the opportunity to find and develop new zones of mineralization at La Negra is excellent. The new three-dimensional models prepared in connection with the Estimate serve the purpose of not only constraining resource block models but also highlights unexplored gaps between existing mantos and obvious mineralized trends. Thus far five exploration targets have been flagged for further drilling, all within 200 metres of existing underground workings. These near-term targets mesh well with La Negra’s large, 82,000 hectare property position in the region, known to host similar rock types and structures as are found at La Negra. As metal prices and operating margins improve these brownfields and greenfields exploration opportunities will allow the resumption of aggressive exploration.

Kevin Drover, President and CEO, comments: “This new mineral resource estimate completed by AMC provides Aurcana with a critical tool necessary to plan the mining sequence effectively and efficiently. This new Estimate more precisely represents grade distribution and continuity within the mine area. The model will support life-of-mine planning with the selectivity required to manage grade control and mining-rates that are in-keeping with our operational experience of the past six years.”

The technical information contained in this news release has been reviewed by Jerry Blackwell, P.Geo, a Director and technical advisor of the Company. Mr. Blackwell is a Qualified Person ("QP") as defined by NI 43-101. 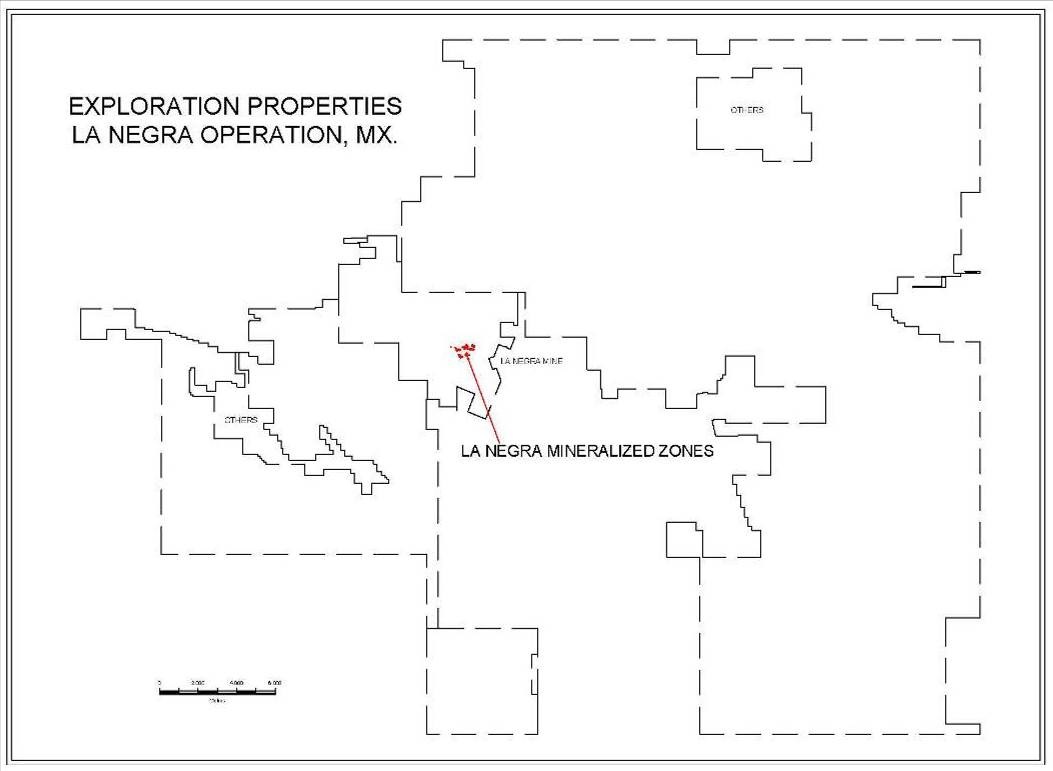 The Company's shares are also traded in the United States on OTCQX under the symbol "AUNFF". Investors can find current financial disclosure and Real-Time Level 2 quotes for the Company on www.otcqx.com and www.otcmarkets.com.

ON BEHALF OF THE BOARD OF DIRECTORS OF
AURCANA CORPORATION